Rising Above, With Sticks, Paper and String

Posted by Nitin Sawhney on May 16, 2012 in Featured Articles | No Comments 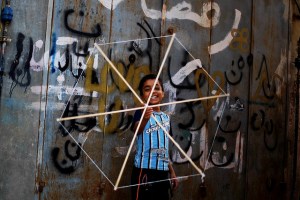 A beautiful article about the culture of kite flying in Gaza despite the siege, written by James Bennet for the New York Times on July 18, 2003. A brief excerpt here:

“It is a gentle piece of orchestration, a harmony of season and need. Every year, the summer sun heats the inland desert to the east, the hot air climbs, the sea breeze builds and the kites rise over Gaza.

Made from colored tissue paper or the folded pages of last year’s homework, they are flecks of white, red or green against an invariably blue sky. Their taut, curving strings lead as invariably to the hands of children, backing, pausing and backing again toward the sea, into the wind, upturned faces a study in transported concentration.

The wires of Gaza have claimed many trophies. Some street-crossing spans are beribboned with severed tails; pinned in others is a familiar skeleton of three crossed sticks, the paper long since blown away. Each lost kite — they hang above almost every street — is a compact story of foot-stamping disappointment, a haiku of chagrin.

Azat stood up, narrowly missing a broken bottle, and prepared to test his kite against the Mediterranean’s long exhale.

Beit Hanun is near the Israeli fence that encloses Gaza, a 7-mile-wide, 25-mile-long stretch that Israel occupied in the 1967 war. This spring Israeli tanks and bulldozers moved into Beit Hanun, razing orange and olive trees, in what Israel said was a mission to stop terrorists from firing rockets over the fence.

During the incursion, Wadiya’s friends flew kites the colors of the Palestinian flag from their houses, trying to land them on the tanks. To his frustration, Wadiya’s own home was too far east, downwind.”

Many similar scenes and stories make their way into our upcoming documentary film, Flying Paper. Stay tuned for more previews as we continue our post-production work…