Playtime is over says U.S. government to the children of Palestine

Posted by Roger Hill on May 10, 2012 in Featured Articles | No Comments 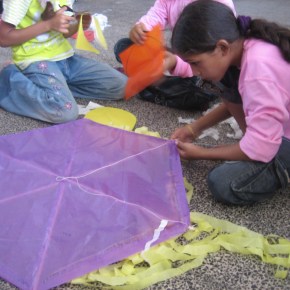 Kite making is only one of several fun Summer Games activities that Palestinian children lost due to U.S. funding cuts from UNESCO

On October 31, 2011 the United Nations Education, Scientific, and Cultural Organization or (UNESCO) voted to allow Palestine full membership into the cultural agency of the United Nations.  The joy for Palestinians served through the agency was short lived however as the United States immediately responded by cutting off all funds to UNESCO, roughly 22% of the agency’s total funding.  Those most directly affected include the youth of the Gaza Strip who this past summer were denied the opportunity to continue participation in the Summer Games program, run by the United Nations, due directly to the cut in funding by the United States.  Said U.S. State Department spokesperson Victoria Nuland: “Today’s vote by the member states of UNESCO to admit Palestine as a member is regrettable, premature and undermines our shared goal of a comprehensive, just and lasting peace in the Middle East.”  The youth of Gaza, affected by the cuts were not mentioned in the press release.

Our film Flying Paper is centered on the Sumer Games Kite Festival.  We witnessed first-hand the joy experienced by over 200,000 Palestinian children who took part in the Summer Games at schools and camp centers around Gaza.  Summer Games provided much needed fun and escape from the pressures and stress many children endure in the Gaza Strip, now these kids and their families no longer have the day camp to relieve their burdens, while UNESCO scrambles to recoup the funding, lost by the U.S. governments reaction to the recognition of Palestine as a member of the culture-centric agency.

A recent UN study found that 80% of children in Gaza reported feeling nervous some or all of the time, and 80% reported feeling sad some or most of the time.  In a recent letter Abby Smardon, Executive Director of the group American Friends of UNRWA  states: “The youth of Gaza are crying out for help. The stress of the ongoing blockade, continued conflict, extreme poverty, and increased gender-based violence have produced intense fear, bed-wetting, poor concentration, eating disorders, sleeping disorders, irritability, and hyperactivity. Left untreated, long-term effects can include anti-social behavior and susceptibility to negative influences, plunging Gaza deeper into despair. These children are the future of Gaza, but what future does Gaza have if its children’s basic needs are not being met?”

The youth of Gaza deserve the right to play as do all children world-wide.  Play, especially in a place of such stress and strife, is vital for positive development, it is a huge shame that the United States has decided to punish the children of Palestine simply for political reasons.  It is our hope that our documentary Flying Paper will shine a light on the joy and success of the Summer Games Program and will serve as a tool to help recoup funding for UNESCO and the re-establishment of the Summer Games Program.