Flying Paper, a Journey of Hope

Posted by Meera Kumar on Jul 3, 2013 in Featured Articles | No Comments 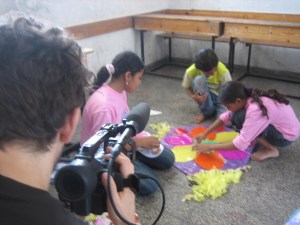 The ability to take a story of such ineffable sadness as the plight of children caught in the political maelstrom of Gaza and turn it into a journey of hope requires a particular deftness, a quality the directors of Flying Paper have achieved in ample measure. We could have been subjected to a dry documentary giving us the staple facts surrounding the lives of the people who live in Gaza in a virtual blockade imposed by the Israeli government. The demographics of Gaza are astounding – 60 percent of the population are below 20 years of age; the unemployment rate is staggering and with the peace efforts at a virtual standstill, there seems no way out. We could also have been subjected to a film where the audience’s emotions are jerked and we are tossed from one shocking portrayal to another. Instead, the directors have created a film laced with humor and, above all else, hope. The children of Gaza are united in their goal to achieve Guinness Book of World Records status by flying the largest number of kites in the open skies overlooking the Mediterranean, a goal they achieve in a scene of soaring dreams and uplifting joy.

The directors must be complimented for making the film at all given the difficulty of obtaining visas for Gaza and the surveillance under which they must have operated. Equally they must be complimented for giving us a documentary that is as delicate in its portrayal of human emotion as the thin paper used to make the kites. These are real children living in a harsh environment and their artless acting is a strong element in the appeal of the documentary. They take to their task of making kites as children would anywhere – assemble what they need with great resourcefulness; show respect and affection to an elder grandfather who lends a hand and gives advice based on years of making and flying kites; speak about nights on which missiles landed near their homes and, in a most endearing scene, boast of how they felt no fear when these missiles landed.

The real triumph of the documentary lies in it being devoid of bitterness or of any attempt at offering a political solution. The audience comes to understand that this is the life lived by the residents of Gaza; we smile and laugh at these children even as certainly some of us contemplate on the banality of evil prevailing over this region.