It Takes Two to Fight Over a Documentary

Posted by Nitin Sawhney on Apr 30, 2012 in Featured Articles | No Comments 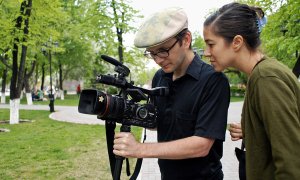 “Documentary directing teams — whether fiancées, best friends, siblings, spouses, or even exes — are standard in an industry not known for its remunerative prospects. On a tight budget two people can do most of the labor on a film, which can take many years to complete. It’s a formula that has proven successful.”

“The work carries over to the apartment, and into bed, and over to the next morning at breakfast,” Mr. Redmon said. “It’s a triangular relationship.”

Sometimes it feels like Roger and I have been in the same boat, while sharing a room and working late nights in Cairo, Gaza or New York on this doc over the past 2 years.