Posted by Julia Hurley on Jun 2, 2012 in Featured Articles | No Comments 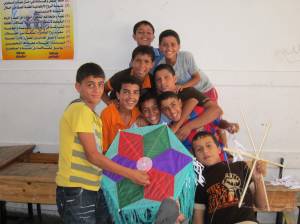 Photo by Julia Hurley, Al Fakhura UNRWA school, Jabaliya refugee camp, 2011. One of the Summer Games sites that was instrumental in the Gaza kite record, and used as a shelter for 1300 people, and Israel shelled it during the devastating attacks on Gaza in winter of 2009/2010, killing 35 and wounding 40 people.

Last summer, after a year of waiting, and arguing with the Egyptians for a visa, I ventured to Gaza for the second time, on an invitation from the UN, and spent three months interviewing families, writing, and learning about life under siege. It was a profound experience in so many ways, but it was the kids who left me moved beyond words. In a place that is virtually an open air prison due to the Israeli siege, where unemployment is at 45%, and 80% of the 1.7 million residents live on less than $2 per day, the spirit, resilience, hope, and humanity of the children was awe inspiring. Never did I encounter a child who had a negative or violent word to say despite their immense suffering, and more often than not, I was met with smiles and laughter and a hope for a better future. While kids in the US dream of being celebrities or rock stars or professional athletes when they grow up, the children of Gaza repeatedly told me how they wanted to be doctors and engineers and lawyers. When asked why, the reply was always the same, “because I want to help my people.” These children were wise beyond their years.

As a testament to this spirit of overcoming obstacles and bringing pride to Palestine, I watched the youth in Gaza break four Guinness World Records in just two months that summer. It was the final record though, that was the most awe inspiring. Just a few weeks before the kids were set to attempt to fly over 7,000 kites simultaneously, breaking their own record from the previous year, it was discovered that China had already beat them to it, but with over 10,000 kites. Undeterred, the United Nations Relief and Works Agency for Palestine Refugees (UNRWA), which was running the event, began preparations to have over 10,000 kids fly kites and beat out China, but this wasn’t enough for the kids. They didn’t just want to mildly surpass this goal; they wanted to blow past it. An UNRWA official at the time told me that they were about to dive into a logistical nightmare, but that the kids wanted to fly 15,000 kites to beat China, and they had to make it happen. I remember sitting there in shock, practically moved to tears by the resilience and determination this showed. This truly was the spirit of the kids that I’d come to know in Gaza though. They were not going to let anyone hold them back and they were constantly going to exceed expectations.

On July 29, 2011, I was an official witness to the kite flying World Record in the Gaza Strip, and I couldn’t possibly have been more humbled or more in awe. As we approached the beachfront site of the record, just a kilometer or two from the Israeli border, over 13,000 smiling, laughing, excited kids were ready, kites in hand, to show the world they can do anything, despite all the obstacles they face. As we counted the record, kids and their counselors enthusiastically ran over, handing in their record sheets, begging to know if they’d done it. It wasn’t until the sun began to set that we started to get a handle on the numbers, and late that night, sitting around a table at the apartment of an UNRWA official, we frantically counted off the record sheets, finally determining that the kids had done it with just over 12,000 qualifying kites for the Guinness World Record.

Gaza could not have been more proud. Not only had their children shown the world that they could do anything they set their minds to, but they had overcome some of the greatest obstacles possible to get there. Siege, war, poverty, a political nightmare, and a last minute change in the sheer scope of the record, could not stop these children from achieving their goal. It truly was a testament to the attitude with which they approach everything. There is a constant determination not to let life get them down, and in a place that should be full of despair and anger, all I ever saw in the children of Gaza was love, courage, and hope.

This is why I’m supporting Flying Paper. This documentary chronicles the stories of the children as they worked to break this record year after year, in a way that my words alone cannot express. Flying Paper tells their story in their voices, which have been silenced for too long. This documentary needs to be seen by the world, so that maybe we can understand what our politics have meant for the most innocent of victims in all of this…the kids. More than that, though, I think this film will show people that despite the politics, and despite falling victim to the nightmare that has unfolded in the Gaza Strip, hope is not lost, especially for the children. You can see it in their faces and hear it in their voices. They are the future of Palestine and they’re inspiring. I cannot think of a better way to show this to the world.

Julia C. Hurley is a non-profit professional and Palestinian rights advocate, who lectures, writes, and raises funds for projects related to children and development in the Middle East, working primarily with American Friends of UNRWA as Adopt a School Campaign Liaison and serving on the Board of the NJ Chapter of the Palestine Children’s Relief Fund. She has traveled to the West Bank three times since 2007 and the Gaza Strip twice since 2009, meeting the directors of Flying Paper during her first trip. She currently resides in Washington, DC and tweets @JuliaCHurley.