Posted by Nitin Sawhney on Nov 16, 2012 in Featured Articles | No Comments

I’m writing a more personal note today, so please pardon this extended piece and hope you will take a moment to read it.

For some time now I’ve been meaning to share some exciting updates about our film progress, including the good news that we submitted a newly-edited feature-length cut of our film (63 mins) to the Berlin International Film Festival on Oct 31st.

We hope to hear back from Berlin by mid-December along with other such festivals we will be submitting including TriBeCa next month. We continue our post-production work on the film, editing a more extended 70 mins fine-cut and creating original music, for release by early next year.

However, recent events in Gaza have brought a more somber urgency to talk about the dire situation there. As you are probably staying abreast of developments in the news, the flare-up in violence (the worst it has been in 4 years) has already caused dozens of fatalities, especially women, children and the elderly (in both Gaza and Israel) and I fear things will only get worse in coming days with an imminent ground invasion planned unless a cease-fire is wisely negotiated.

It has been particularly heart-wrenching for me to watch things unfold as the very places in the northern frontier and Jabalia refugee camp, where we shot much of our footage with children making and flying kites in the much calmer and playful days during my visits in the past 3 years, are the one 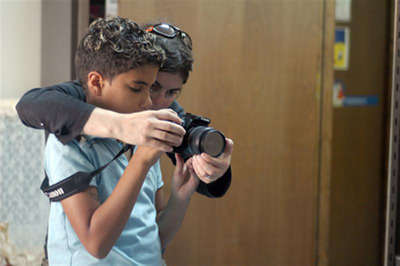 s now being bombed heavily and most vulnurable to continued loss of life.

I have been on the phone regularly with Anne Paq, our co-producer and photographer who has been in Gaza this past week to shoot additional footage for our film. Anne and I have worked together for over 5 years doing youth media trainings in Palestine. She recently produced an amazing short film, “Not a dreamland” about the vibrant artists and alternative subcultures in Gaza, which was just released online.

Anne has been quite shaken by current events the past few days but is holding up ok at the moment. For an experienced human rights photographer watching the effects of the violence take a toll on the youngest children in Gaza has just been devastating.

Anne continues reporting and photographing the siege, despite intermittent internet access (which may soon be shut entirely). Please take a look and stay abreast of her updates here: http://chroniquespalestine.blogspot.com/

I’m sharing a moving excerpt from Anne’s blog yesterday and the corresponding photo (which has widely appeared in news media):

“As I write now, I am back in my home. While I was editing pictures I could hear the scary sound of the bombs. The street was empty of cars soon and there is no light almost. I moved far from the window which can easily get smashed (by) some of explosions (that) happened nearby. In Al Shifa hospital there was total chaos with so many injured persons (who) kept coming in.

When I arrived to the section where they burned the treated persons, some women collapsed in grievance, they just found out that Omar Jihad Masharawi, a 1 year old baby died of his wounds just (now). One of the women was his mother.

I went up with other photographers, I cannot describe with words what I saw, and neither can I post the grim pictures of a burned baby. This is just horrific. Later the father Omar carried (the baby) to the morgue, crying his eyes out. I went home. I feel nervous, with the news coming about more attacks, more injured. There is Nowhere to escape in Gaza.”

Anne’s photo collective, Active Stills has posted a selection of their images from Gaza and Israel here:
http://972mag.com/a-week-in-photos-assault-on-gaza-intensifies/59955/

I will be talking about the current situation in Gaza and showing Anne’s photography as well as the latest version of our film at several educational and advocacy screenings over the coming 2-3 weeks, to both raise awareness and fundraise for our continued efforts (as I’ve done at NYU recently).

Our next screening is being held at the University of Pennsylvania in partnership with Playgrounds for Palestine, in Philadelphia on Sunday, November 18th from 12-3pm. The event will feature a panel discussion on creative play and resilience, and our animator Daniel will also join me in discussing the making of hand-made animations for the film.

Please help us spread the word and feel free to join us or invite friends in the area. We also plan to do another private screening in Washington D.C. near Dupont Circle on Sunday, December 2nd 3pm – let us know if you would like to attend.

If you wish to support our efforts please contribute or tell friends about the project. Tax-deductible donations can be made online through our fiscal sponsor Fractured Atlas, a nonprofit arts organization:
https://www.fracturedatlas.org/site/fiscal/profile?id=6482

I’ve previously written about our need for film finishing funds to complete the project by the end of December (since we have exhausted all our Kickstarter funds raised), but now it takes on an even more pressing concern as we continue to support Anne’s extended work in Gaza despite the turmoil.
http://flyingpaper.org/flying-paper-appeal/

While I’m confident that our film will get completed this year it has gained even more urgency to be seen by audiences in the US and abroad to showcase the humanity and creative spirit of young Palestinians in Gaza. I hope you can stay abreast of the news, join protests or spread the word among friends and family about the evolving situation in Gaza.

Thanks for all your continued support of this project and our team’s efforts both here and in Gaza, where Anne Paq, Abeer and many of our youth are currently struggling through the turmoil they are experiencing on the ground.

I hope things will calm down soon and they will all stay safe. I’m looking forward to an opportunity to visiting them in Gaza in coming months.