Posted by Daniel Nienhuis on May 5, 2012 in Featured Articles | No Comments

Article by Daniel Nienhuis, Lead Animator for Flying Paper, May 5, 2012

One reason that I love animation is that if one takes a step back and considers what is going on, it really shouldn’t work.  In fact, symbolic, representational art in general should not work.  Our brains should reject it.  A stick figure has virtually no real resemblance to a human being.  As far as I can tell, there has never been a species of mouse that looks the least bit like Mickey.  And yet, somehow, these symbols and countless others are instantly interpreted, decoded, and imbued with meaning.  How is it possible that two dots and a line can be “read” as something as variable and complex as the human face?  Not to mention the ability to convey concepts as abstract as the emotion of joy or sorrow.  And yet, there it is.  : )  Happy.  : (  Sad.

This interpretive ability seems to be hardwired into our very nature.  What is a cave painting but a cartoon?  What are ancient Egyptian wall carvings but the frames of an animation sketched out thousands of years before technology could catch up with something that is clearly essential to our very sense of being human?  And the simpler representational art is, the greater its capacity for interpretation.  A truly great portrait artist may be able to capture a complicated feeling like longing or pleasant surprise through the careful reproduction of reality.  For a cartoonist, something as simple as a blink, or a shrug, or the tilt of a head can carry a great deal of interpretive weight.  How many pieces of “realistic” art can carry the emotional impact of something like this simple drawing by Charles Schultz? 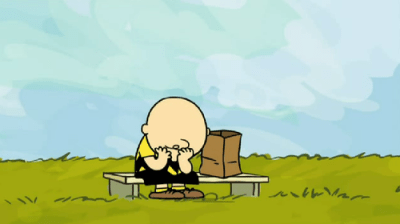 Or this sense of endearing awkwardness in the clay figures of Nick Park?

That is why I think that animation is truly, vitally important as an artistic medium – and why the Western notion that it belongs to the category of unsophisticated children’s entertainment is so infuriating.  I do not mean to imply that animation is better or “purer” than other cinematic styles.  But animation places a unique and valuable interpretive lens between the audience and the subject matter.  It allows us to interpret the symbolic representations of cinema in different ways.

When Nitin and Roger approached me about creating some animated segments for Flying Paper, I was incredibly flattered and excited by the opportunity.  Animation within the context of documentary film occupies a very unique position.  Although the animated segments in Flying Paper will make up a comparatively small part of the film as a whole, I feel that they can go a long way in terms of establishing a tone and aesthetic identity.

During the brainstorming process, Nitin, Roger, and myself returned repeatedly to the term “handmade.”  Since Flying Paper tells the story of children building and flying kites, it seemed appropriate to avoid animation and graphics that were especially slick and polished.  I wanted the sequences to have the same qualities as the kites themselves – rough around the edges and lovingly imperfect.  For this reason, a traditional “analog” approach to animation seemed ideal and stop-motion was the logical choice.

Despite being labor intensive and technologically obsolete, stop-motion animation is enjoying something of a renaissance lately.  In the next few months alone, three major stop-motion features will be released in the United States – The Pirates!, from Aardman Studios (of Wallace and Gromit fame), Tim Burton’s Frankenweenie, and Paranorman, from some of the same creative team as 2009’s Coraline.  The reason stop-motion has persisted in spite of the ever-increasing prevalence of computer animation is hard to pinpoint exactly, but I think there’s a certain charm to the technique that is still not reproducible by other means.  The fingerprints of the animator are (sometimes literally) visible in the finished product. 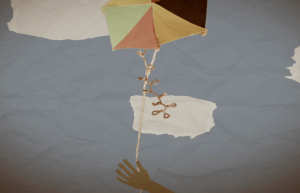 While much of my work – including that done for Flying Paper – involves a combination of analog and digital techniques and tools, I have very much tried to take a “hands-on” approach wherever possible.  I have let things remain a little jittery, a little off-kilter, a little imperfect.  I have tried to leave my fingerprints on the work.  In my interactions with the other members of the film’s crew, I have detected a similar sensibility: the desire to create a film with a hand-crafted mentality, to build a project that is honest in its approach and full of passion.

Flying Paper is a film made by hand.  Whether the medium is analog or digital, the creative touch of its makers is clearly visible in the final product.  It’s been a great joy to be a part of that process; I hope all you enjoy discovering the fingerprints of those involved as much as I have.

Daniel Nienhuis is a freelance animator and video editor currently working out of central Pennsylvania.  You can view his work online at wataingi.com.