Posted by Roger Hill on Apr 24, 2012 in Featured Articles | No Comments 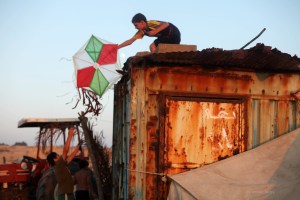 Kite making in Gaza is an important skill that has been passed down through the generations. Each kite has a unique design pattern, identity and poetic symbolism for young Palestinians. The act of kite making and flying provides a creative, recreational and symbolic release for children and youth in Gaza, if even momentarily, to cope with the everyday struggles of life.

The tone of Flying Paper is a counter to the serious and heavy tone of most documentaries on the subject of Palestine. We aim to make an enjoyable Narrative Documentary that is inspiring and empowering, which focuses on the achievements of youth in Gaza who endure hardships, but are resilient in their efforts to represent themselves and their culture with pride and grace. The political situation and suffering of the Palestinians in Gaza isn’t ignored in the film, but rather it is part of the context in which an inspiring story with engaging characters takes place.

Our goal is to make a film that will appeal to both Western audiences who may, or may not be concerned with the situation in Gaza, but who will be attracted to the story centered around resilient children, and will appeal to Palestinian and Middle Eastern audiences who will enjoy a fun and uplifting film from a place that is so often represented through the lens of pain and strife.

This film was made with the assistance of Palestinian youth who joined the production crew and played instrumental roles in the filming, crafting, narration and production of the film. The youth team provide authentic interviews with their peer kite flyers throughout the film.

The aesthetic and cinematic style of the film is intended to be intimate and direct in following the lives of a handful of young Palestinians in the simple act of making and flying kites in the desolate yet stunningly beautiful landscapes of Gaza. The film purposely uses hand-held cameras and close-up shots with various key characters. The footage speaks for itself with personable characters taking the viewers through the narrative and adding a sense of drama through competitive kite flying.