Behind the Scenes: Pulling off a Sneak Preview in New York

Posted by Roger Hill on May 23, 2012 in Featured Articles | No Comments 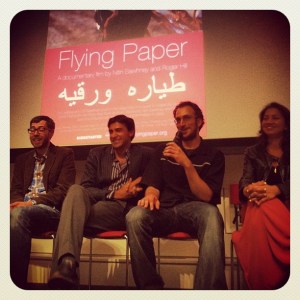 Sneal Preview Screening of Flying Paper at the New School, New York, May 21, 2012. From left Daniel, Nitin, Roger and Hadeel, members of the Flying Paper team.

“You guys must have nerves of steel,” remarked a colleague of Nitin’s shortly before the start of last night’s sneak preview of Flying Paper.  As guests were returning from the buffet table to their chairs and the music portion of the evening was winding to a close the co-directors, myself and Nitin, were fervently hitting refresh on our Vimeo browsers, hoping the new edit of the video selection we were planning to show that night would process in time to screen for the audience.  It did not!

That morning I awoke on Nitin’s couch to the sounds of loud thunder, pouring rain, and children yelling.  Nitin was already at his computer working away after maybe 4 hours of downtime – or as some people call it sleep, and I was stretching after 3 weeks of couch surfing in New York.  Write this down kids, documentary filmmaking really is as glamorous as it looks.  I looked out the window and was like “holy cow is anyone going to show up this event tonight if it keeps pouring like this?”  Nitin wasn’t worried, he had just gotten an email from the Director of the United Nations Relief Works Agency in New York City and was planning to attend.  Nitin, seized the opportunity to ask him to present a short speech about UNRWA’s work in Gaza and some of the facts and statistics about the Palestinian refugee crisis to help orient the audience.

Filmmaking is equal parts preparation and winging it.  The day of the show with our editor Ramon working remotely in Colombia around the clock the 3 days prior to the event, we were left waiting for the file to upload and process on Vimeo (like Youtube, but less obnoxious), hoping it would upload and process by show time, instead the internet in Bogata chose that time to crawl to a near stop.  45 minutes into the start of the event, it was evident the edited version of the film we were planning to screen wasn’t happening.  We had a full house, over 200 people, the music portion of the event was coming to an end, and everyone was settling in for the film screening.

Once in college I remarked to a Film Professor and Documentary Filmmaker, “What can go wrong, will go wrong,” he looked me dead in the eyes and said “Nonsense, Murphy was an optimist.  What can’t go wrong will go wrong.”  Always have a Plan B.

In the hours before the show I prepared a backup edit just in case the cyber highway was bumper to bumper, it was, but I wasn’t too stressed, I’d been through worse.  I know how it is to edit feverishly to the last minute before a screening and then discover one does not have enough time to transfer the file into a screenable format.  In fact, I once was reduced to throwing my desktop computer into a car, driving to the venue 15 minutes late, only to frantically assemble the AV inputs to screen-share the project file from my computer on to the screen.  In that instance I actually had to stop the film half way through and make some audio adjustments in order for the audience to hear the rest of the film.  The show must go on.  Relative to the stressful screenings I’ve endured in the past, last night was nothing, a successful event was not out of reach, it was happening, initiating Plan B.

We opened the evening’s program with DELICIOUS Palestinian food from Tanoreen a restaurant in Brooklyn.  When phoned about catering the event by our organizer Hadeel they responded “How could we say no to you guys,” this despite the fact that they do not open the restaurant on Mondays, the day of the show.  They delivered big time.  A few minutes after seven we opened the lids on the buffet and the room was filled with the delicious smell of over 12 dishes specially prepared for the event.  As guests continued to pile in the doors we twice added more seats to the ballroom as the infinitely talented Camila Meza and her band began their set of smooth jazz.  It was coming together, great music and delicious food and a friendly crowd eager to see their first glimpse of Flying Paper.

At the last moment Nitin and I finally decided to go with the backup video, and we started the screening portion of the show with the trailer.  We could have screened the short trailer or the extended version with the Kickstarter pitch.  I decided of course we’re going to show the Kickstarter version, because why not remind people again that we have 2 weeks to raise half of our goal in order to complete a successful campaign and receive the money necessary to complete the film, as opposed to not reaching our goal and receiving exactly $0. I digress, after the trailer wrapped up I stepped to the microphone to introduce the short selection I had just prepared an hour earlier.  I was pretty confident they would like it, Nitin on the other hand, having not seen the piece, or more importantly heard how the audio was going to come out may have been sweating it a bit.  We had recently test screened the rough cut in a similar theater at the New School and the audio sounded very rough.

It was good to step away from the rough cut editing for a couple weeks and come back to it after working with Ramon.  I was much more decisive in my edits and having test screened in the New School theater before, knew I had to do something about the audio or else the audience was going to get blasted with loud gusts of wind on the microphone, I dropped the gain and lowered the volume in a couple of spots and it was good to go.  The edit came out great.  Was not a stressful screening after all, wonderful turnout and great discussion afterwards (a video of which we will be posting to the site in a couple days). An audience member, Mahmoud, remarked how he doesn’t want this film to end because he loves watching the process of how it’s coming together.  That night the process did come together as a huge team effort and a little bit of winging it made for a wonderful evening.  Mahmoud spoke again and left the audience mesmerized with these words:  “Growing up in Palestine, kite flying was only thing that made me feel free, that ‘oh my god there’s a sky up there.”

Short Video of the event, edited by Sara Fusco