Posted by Roger Hill on Apr 26, 2012 in Featured Articles | No Comments 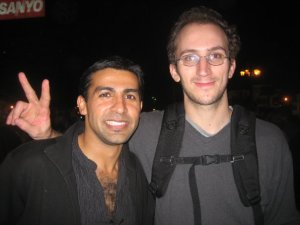 Boredom sets in on an 11 hour flight from New York to Cairo, its winter of 2009 and I am flying to join an international protest dubbed the Gaza Freedom March, I notice an article about the freedom march the Egyptian-American man sitting next to me has opened in his newspaper, I strike up a conversation.  He is visiting family and taking his 4 year old daughter to Egypt for the first time in her life, I am a videographer heading to join the protest in hopes of travelling across the Egyptian border into the Gaza Strip  to stay on for several weeks working on a documentary project.  Because of the severe siege embargo imposed by Israel and cooperating countries, travelling to and from Gaza is very difficult for Palestinians, Americans like myself, and anyone without a high degree of clearance from either the Israeli or Egyptian authorities.  While sympathetic to the cause of the protest, my primary reason for joining was that I figured it would be the easiest way to access Gaza, it was not.

I finished my conversation with the man sitting next to me, it was friendly though not particularly meaningful for either of us I’m sure, when the man sitting behind me and across the aisle, perhaps despite his better judgment, got my attention and mentioned he too was joining the Freedom March.  Nitin and I introduced ourselves and chatted about the protest.  I noticed Nitin’s professional demeanor, and contrasted with my dirty jeans and sweatshirt, surmised that this was a person who probably had his hotel arrangements figured out, in my haste and procrastination I had not made such arrangements.  Shortly before touchdown I made my inquires about convenient lodging near downtown Cairo’s Tahrir Square, turns out it was holiday season for the Coptic Christians, or Coptic Christmas, and finding a room was not as easy as I’d assumed.  I needed to act so I set my sights on Nitin, we split a cab from the airport, I explained my plight, and accepted his generous offer to persuade the hostel staff to add a second bed to his room.  Thus began our near 3 year partnership that would eventually lead us to Co-Directing the film Flying Paper.

The Gaza Freedom March happened, though it was not the massive demonstration of over 1500 protesters from countries around the world joining throngs of Palestinians in a march to the apartheid wall separating Gaza and Israel, as the group was planning.  Instead the border was sealed off by the Egyptian government, and only a select 100 protesters were authorized to take a mere two day trip to Gaza.  Surprisingly Nitin and myself were on the select list, but upon seeing the dissension and emotional toll, the tactic of fragmentation was having on the larger solidarity group, both Nitin and myself made the difficult decision not to join.  Thus ending our participation with the Freedom March and beginning our individual efforts to enter Gaza to make a cinematic film different in style to most gritty documentaries on the subject of Palestine, on a subject to be determined.

One quick note on the Gaza Freedom March:  After being denied access to Gaza most of the protest activities, by the international activists together with Egyptian activists, centered in Cairo’s Tahrir Square one year before the Arab Spring Revolutions.  This garnered a good deal of attention towards the Egyptian government’s  culpability in enforcing the siege on Gaza with Israel, and highlighted the oppressive rule of then President Hosni Mubarak.  The governments authoritative handling of the Freedom March and those protests was a wakeup call for myself on Egyptian politics, and an early precursor of the revolution to come just one year later, when the Egyptian people rose up, rallied day after day in Tahrir Square and across Egypt, and overthrew a corrupt government.

After the bulk of the Gaza Freedom March activities wound down I travelled with a group of friends to cross the Sinai Peninsula to enter the border with Israel in order to enter Palestine and travel to Jerusalem and the West Bank.  Nitin remained in Cairo awaiting word after petitioning the Indian Embassy for entry into Gaza.  The bus across the Sinai Peninsula was nearly as long as the flight to Cairo and twice as cramped.  I was traveling with Nuha, a Palestinian American friend of mine from back in San Francisco’s Bay Area, as well as Alex, a young Jew from New York pursuing a career in journalism, and a few other friends from the march, also joining us was an Egyptian activist who I’d met at some of the protest activities.  He was a young man who I saw at nearly every protest I’d attended in Cairo.  We were nearing the border around 6 am, when Egyptian military boarded the bus and checked our passports.  Nuha presented her U.S. passport, they passed her by, Egyptians in front of me presented their identification, the soldiers approached me, I presented my U.S. passport, no problem they passed on by, three rows back I hear them questioning the young Egyptian man from the protests.  I do not speak Arabic, so I don’t understand what is happening, they take him off the bus.  I see them questioning him on the side of the road as the bus drives away.  Torture of activists is common practice in Egypt, I’ve come to learn in my first 2 weeks in the country.

The bus reaches the border.  The people travelling with the young man pulled from the bus have heard no word from him on their cell phones, we are now on foot approaching the border checkpoint with Israel, Nuha and Alex are holding hands, sarcastically flaunting Israel’s strict ethno-religious hierarchy, I am stressed.  Passport check, luggage through the x-ray, initial questioning check, I approach the booth and present myself nonchalantly as a tourist. Have I been to Israel before?  Yes I have in 2007, I’m here just for travel.  OK go on through.  Or at least that’s about how I remember the five minutes I was perceived as a tourist and not an activist, or in Nuha’s case, a Palestinian.  I waited just past the checkpoint on the other side of the border for my friends.  An hour passed.  A White American friend of ours stands within the checkpoint and calls out to me.  Despite Nuha’s U.S. passport she is found in their database as being Palestinian and is told she cannot enter, in fact I would later learn, the pregnant Israeli soldier interrogating her, waved Nuha’s U.S. passport in her face and told her “this means nothing.”  Another pregnant Israeli soldier, no kidding, approaches me realizing that I was not travelling alone as a tourist, as they had earlier assumed, but that I was in fact travelling with a Palestinian American, I was called back into the security checkpoint and my passport was taken away from me, the entry stamp placed less than an hour earlier now deemed “in question.”

5 hours pass, I sit uncomfortably on a plastic chair, loads of tourists walk past me eyeing me curiously, I get a text from Nitin, he has been granted entry into Gaza, he leaves late tonight, it is now nearing 3 pm.  I’ve had enough of this security check bullshit, and I figure if I were to rush back to Cairo now, I might be able to get my video camera to Nitin to bring to Gaza, to me the next best thing to going there and filming myself.  Pregnant Israeli soldier #2 tells me to wait as I inform her I wish to leave back to Egypt.  My passport is re-stamped “access denied,” or something and I rush back to the bus depot barely catching the last bus back to Cairo.

10 hours later I am in  a cab in a frantic rush to meet Nitin at the mini-bus station on the outskirts of Cairo where he was about to share a cab to the Gaza border.  Actually just before that mad dash as I got off the bus and was heading with the cab driver to his car when an Egyptian man ran to me saying “are you Roger?”  Come again?  It seems I had dropped my pouch containing my passport and a few hundred dollars in the bus in my haste to catch a cab to meet Nitin.  One of the passengers found the wallet, brought it to the driver, who then sent another man running after me to return the money and passport.  That’s what I call hospitality.  Anyway I caught my breath briefly before racing off to meet Nitin in the nick of time.  “Here’s the camera, the battery and the microphone plugs in here, the zoom is a little touchy but you’ll get used to it,” and he was off, I never left the cab handing the camera through the window as Nitin’s driver yelled impatiently in the background, the baton had been passed.

(Stay tuned for Part 2 of this story: Strawberry’s Roosters, and the Chocolate Sea )